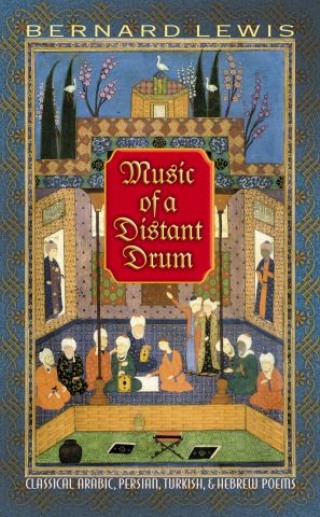 Music of a Distant Drum

Music of a Distant Drum marks a literary milestone. It collects 129 poems from the four leading literary traditions of the Middle East, all masterfully translated into English by Bernard Lewis, many for the first time. These poems come from diverse languages and traditions--Arabic, Persian, Turkish, and Hebrew--and span more than a thousand years. Together they provide a fascinating and unusual window into Middle Eastern history. Lewis, one of the world's greatest authorities on the region's culture and history, reveals verses of startling beauty, ranging from panegyric and satire to religious poetry and lyrics about wine, women, and love.

Bernard Lewis, one of the world's greatest authorities on the region's culture and history, offers a work of startling beauty that leaves no doubt as to why such poets were courted by kings in their day. Like those in the Rubaiyat of Omar Khayyam, the poems here--as ensured by Lewis's mastery of all the source languages and his impeccable style and taste--come fully alive in English. They are surprising and sensuous, disarmingly witty and frank. They provide a fascinating and unusual glimpse into Middle Eastern history. Above all, they are a pleasure to read.They range from panegyric and satire to religious poetry and lyrics about wine, women, and love. Lewis begins with an introduction on the place of poets and poetry in Middle Eastern history and concludes with biographical notes on all the poets.

This treasure trove of verse is aptly summed up by a quote from the ninth-century Arab author Ibn Qutayba: "Poetry is the mine of knowledge of the Arabs, the book of their wisdom, the muster roll of their history, the repository of their great days, the rampart protecting their heritage, the trench defending their glories, the truthful witness on the day of dispute, the final proof at the time of argument.?

In one hand the Qur'vn, in the other a wineglass,
Sometimes keeping the rules, sometimes breaking them.
Here we are in this world, unripe and raw,
Not outright heathens, not quite Muslims.
--Mujir (12th century)