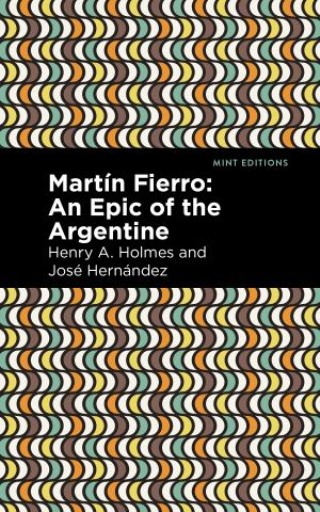 An Epic of the Argentine

Martín Fierro: An Epic of the Argentine (1923) is an epic poem and accompanying scholarship by José Hernández and Henry A. Holmes. Originally published in two parts, the poem has been praised as a defining work of Argentine literature for its depiction of national identity in relation to the gaucho culture, which was used to consolidate the historical and political image of the country against European influence. Unlike many of his contemporaries, Hernández was a writer who grew up in a ranching family, who knew firsthand the prowess of a people who helped Argentina free itself from Spanish control.Martín Fierro is a masterpiece of Spanish-language literature that continues to define and inform Argentine culture today. In this text, scholar Henry A. Holmes translates parts of the poem while contextualizing it alongside works of Hernández’s predecessors. In addition, Holmes provides invaluable information on the poet’s life, discusses the significance of the gaucho in Argentine literature, and investigates the portrayal of the indigenous peoples of Argentina in the poem. With a beautifully designed cover and professionally typeset manuscript, this edition of José Hernández and Henry A. Holmes’ Martín Fierro: An Epic of the Argentine is a classic of Argentine literature reimagined for modern readers.

José Hernández (1834-1886) was an Argentine poet, journalist, and politician. Born on a farm in Buenos Aires Province, he was raised in a family of cattle ranchers. Educated from a young age, he became a newspaperman during the violent civil wars between Uruguay and Argentina through his support of the Federalist Party. He founded El Río de la Plata, a prominent newspaper advocating for local autonomy, agrarian policies, and republicanism. Towards the end of his life, he completed his extensive epic poem Martín Fierro, now considered a national treasure of Argentine arts and culture.

Henry A. Holmes was an American translator and scholar. After several years of living in Uruguay and Argentina, he became familiar with the works of José Hernández and the gaucho lifestyle he celebrated. Part translation, part scholarly work, Martín Fierro: An Epic of the Argentine (1923) was published as partial fulfillment of Holmes’ PhD in Philosophy from Columbia University.